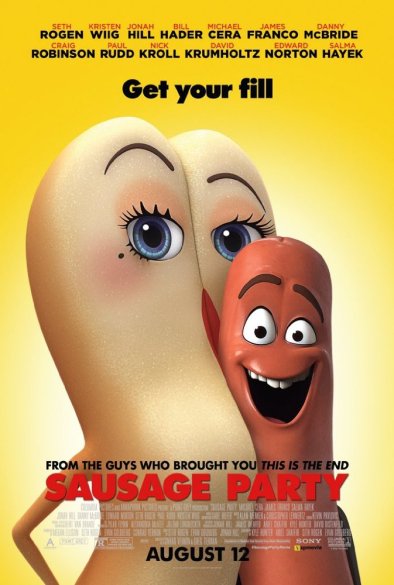 As a child getting up early to watch Saturday morning cartoons was the highlight of the day and picking out a Disney movie from a large collection of VHS tapes was part of every kid’s weekly routine. Cartoons or animated movies were one of the few outlets of entertainment that seemed to understand a person as a child, they were silly, outlandish, and outright eccentric, and reflections of who we were as children. Now as adults, we don’t have many animated movies to cling to, most of them are PG-rated for children with a few jokes thrown in there that only adults would understand.

The animated feature Sausage Party takes just that idea and gives adults a cartoon film just for them. The movie is raunchy, hilarious and filled with every sexual innuendo (the sausages want to hook up with buns), stereotype (the Sauerkraut bottles are Nazis), and food related joke (the Horseradish jars literally turn into horses) in the book. A film of this magnitude and content could only be co-written of course by one of the few duo’s in Hollywood that could pull this off, Seth Rogan and Evan Goldberg, the stoner minds behind Superbad and Pineapple Express.

The film is about the lives of the food in a supermarket called Shopwell, all the food there believes that when they are chosen by a shopper they will be taken to the “great beyond,” or the outside world, where all their wildest dreams will come true. Every day for them starts off with a musical number led off by Corn, a happy song they play for the Gods. Firewater (Bill Hader), an Indian can of lighter fluid, has every food in the store believing that the great beyond is a wonderful and magical place.

Frank (Seth Rogen) the sausage and the rest of his wiener pals, specifically loud mouthed Carl (Jonah Hill) and Barry (Michael Cera), the awkwardly shaped sausage in the package, wait for the fateful day that they will be chosen. They hope to be picked next to their counterparts, the bun gals, who will one day be mated with a sausage. Then the impossible happens after a jar of Honey Mustard (Danny McBride) is returned. Honey Mustard proclaims to everyone that the outside world is filled with monsters who will eat them. 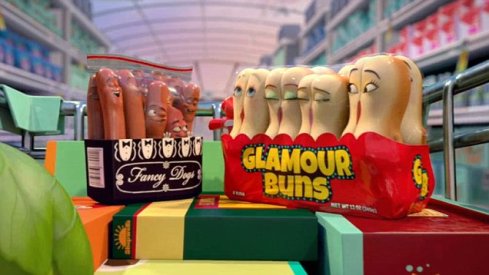 When Frank and Brenda’s packages are finally chosen they are super excited to be in the supermarket cart together. A bottle of Douche (Nick Kroll) is also chosen, who is literally the representation of a “douche.” He talks with a Jersey Shore accent and is super obnoxious. Then the unthinkable happens and a huge accident happens where many of the items fall to the floor. Frank and Brenda are thrown from the cart, along with Douche who is now bent, broken and angry that he is no longer whole. Douche is hell bent on revenge and wants to kill Frank. From here what ensues is a hilarious and just outright crazy.

Along the way, Frank and Brenda run into Sammy Bagel Jr. (Edward Norton) and Lavash (David Krumholtz) who are also lost and looking for their way back to their aisle. Together the four of them join forces and encounter a random array of characters, there is Teresa the Taco (Salma Hayek), Grits (Craig Robinson), Gum (Scott Underwood) who is in a wheelchair and talks like Stephen Hawking, Tequila (Bill Hader) who cannot be trusted, and even a crazy guy on bath salts (James Franco). 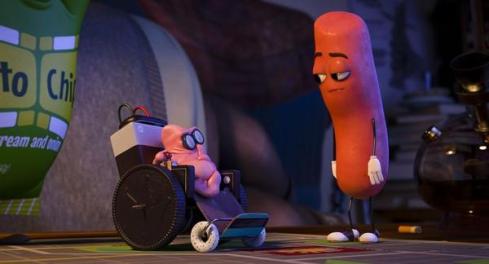 The film is hilarious from beginning to end and I really have never seen anything like this before. I mean there are some funny and out there cartoons on Adult Swim from the Cartoon Network, and then there is Family Guy, which throws out some pretty raunchy jokes itself, but this movie takes everything and amps it up about a thousand notches. 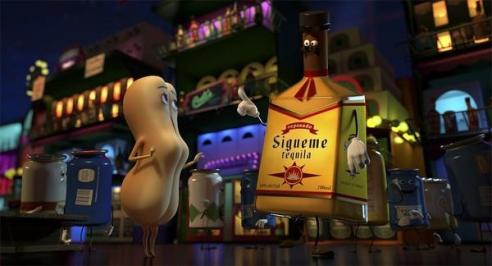 At some points, I even found myself cringing a bit, but what can you expect from a movie with talking sausages. I think the creators knew they had to go there with this format, otherwise I think they would have been criticized for not pushing the envelope enough. The story faults a bit here and there where it starts off strong in the first half and towards the second loses some of its focus, but overall I think the film worked.

I thought Rogen killed it, his voice is perfect for this type of movie and Wiig, despite being just a voice was phenomenal and her humor resonated even as a cartoon character. I can guarantee she will be doing more animated voices soon. Cera was also funny and his voice was perfect for the abnormal hot dog. My favorite character had to be Gum, he was the smart one of the bunch who can never die because gum just doesn’t ever go away. Just seeing a piece of gum in a wheelchair with glasses was just too funny. 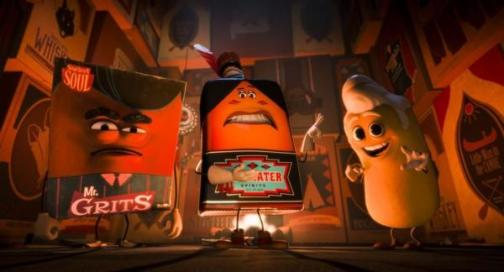 This is a perfect movie to see with friends or just for a night of laughter. I bet this movie will be a hit when it is released on DVD because I am sure it only gets funnier after watching it a few times. But I have to warn you after watching this movie, you will never feel the same way about picking out your produce and condiments at the supermarket again.

Hulu’s Nine Perfect Strangers is a mix of Big Little Lies and White Lotus, sprinkled with a bit of Clue. The whodunnit vibes and tension can be felt throughout the show, but it is not specifically a murder mystery. Nicole Kidman stars as Masha, the owner of Tranquillim, an expensive and elite retreat for those who want to unwind and come to terms with their issues. Many think they are there just to chill out and relax, but what they don’t know is that Masha has hand selected them and is looking to heal them with her own new age methods.
If you missed season 1 of Ted Lasso, well then now is the time to start Season 2. Lasso is wholesome to an extent and a fun and easy show to watch. Which is kind of a nice break from all the crime and horror filled shows that pervade our television screens. Jason Sudaikas stars as Lasso, the American coach who is sent to England to help guide a failing soccer team, he is hilarious and filled with a plethora of dad jokes. He has so many good jokes and he slips them in ever so slightly, so it helps to pay attention when he speaks. This is a great one for any sports lover as well, as they show the camaraderie and sportsmanship that it takes to be a professional athlete. The show itself has taken off with professional coaches and athletes because it encapsulates what it means to be in the thick of it and playing on the field. Lasso is charismatic and sweet and will win the heart of any viewer. I love all the characters and find myself laughing from beginning to end. Check this out on AppleTV+. Who else is a Lasso fan?
an Murphy just turned the American Horror Story franchise on its head by making a collection of short stories to bide our time before the new season. One of my issues with AHS has always been that the storylines falter mid-way through or they try to do too much and the story always pays the price. But with this new season, we get one story per episode (except for the murder house, which had had three) and that’s it. This allows them to give us a quick and creepy story and add in lots of different actors throughout the season. I think people are either going to love or hate this. I enjoyed it because it was a quick and easy way to get my AHS fix without having to commit and get involved in a lengthy story. I didn’t think every episode was perfect, there were some cheesy B-movie type ones, but for pure entertainemnt, I recommend it! Who else watched this and did you love or hate it?
The Apple TV+ series Physical is a dark story about redemption and grit. Rose Byrne stars as Sheila, a 1980s housewife who is busy supporting her husband with his political desires and taking care of their young daughter. Meanwhile, she feels like she has nothing going for herself, and is battling bulimia. We see her stop at fast food chains and go through a whole ritual of binging and purging, all the while no one knows she has a problem, because on the outside she seems perfect. She randomly finds an aerobics class at the mall, and it becomes her lifeline to salvation. She is so good at it that she starts making videos, at a time when the VHS was just evolving into a staple in every American household. From there the show quickly unravels. We hear her inner dialogue through the whole show, she fat shames people and herself, and on the outside just smiles. The storyline is interesting and unique, add it to your list if you need something different!
Shake me out of my coma. I just spent the past few weeks binging Yellowstone on Peacock and absolutely loved it. Let me warn you, it is ridiculous at times, like crazy stuff happens on every episode, where you just shake your head and go WTF just happened. It almost has that Sons of Anarchy level of craziness, but with cowboy hats and horses involved. On top of the drama, it mixes in plenty of romance and charm and is set against the beautiful landscape of Montana. The show is about John Dutton, his ranch, his kids, and the cowboy hands who live there. Each family member has a role to play in the handling of the Dutton ranch, including its finances and legal woes. The Dutton’s run the town and each person has their own storyline and drama that unravels. My favorite character is definitely Rip, the lead cowboy wrangler, who is no nonsense and will do anything to save the ranch. Is anyone else a fan of the show?
HBO Max’s new miniseries White Lotus is hilarious yet totally dark. That’s a hard combination to create in TV, but it works. The show is about a group of tourists staying at a beautiful Hawaiian resort. The cast of characters is mixed in with the hotel staff. Every person has their own issue and drama they are dealing with, from the concierge who is trying to stay sober to the high powered family with major secrets to the newly weds who have some kinks in their marriage to work out. I laugh out loud in every episode and Jennifer Coolidge steals the show as the kooky woman who is codependent and needy and desperate for love. Every episode builds upon the last, there are no fillers or boring moments, it all works. One of my favorite shows so far of 2021. Highly recommend if you need a new show to watch.