Sully
Directed by Clint Eastwood
Written by Todd Komarnicki, adapted from the book by Chesley Sullenberger

Rarely do true heroes want accolades and admiration, think police officers, fire fighters, doctors, etc., instead most of them are quick to say that they were simply doing their job. In Clint Eastwood’s new film, Sully, he depicts the pilot Capt. Chesley “Sully” Sullenberger (Tom Hanks) as a stoic, no frills type of hero. This isn’t a film about a man wearing a cape saving the world, instead it is about a man who saved dozens of lives or “souls” as he says, and lived to tell the story that would forever define his life.

The film is set on the real life events that occurred on January 15, 2009, also known as the “Miracle on the Hudson,” when US Airways flight 1549 was set off course by a flock of geese that crippled both engines. Instead of heading back to La Guardia airport as suggested by radio air traffic controllers, Sully and his co-pilot Jeffrey Zaslow (Aaron Exckhart) made the decision to land the plane on the Hudson River. A feat never done before and one that is rarely if ever successful. The plane landed in the water and every single passenger and aircrew member survived. To say that what happened that day was a miracle, is an understatement. 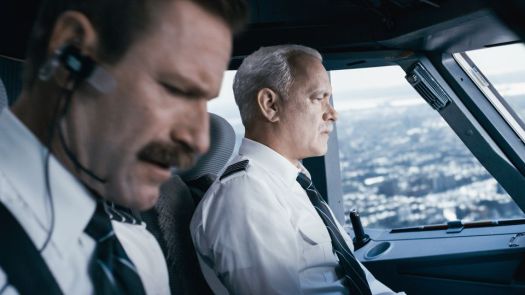 Much like Eastwood’s most notable previous film American Sniper, he once again brings audiences up-close and personal through life and death matters. The traumatic event isn’t shown as expected, as in the beginning of the movie, instead the events are shown in a dispersed manner. They are cut with Sully’s nightmares of what could have been that day, scenes that look reminiscent 9/11, with the plane coming tremendously close and exploding into New York City buildings. One of the main features of the film that I enjoyed was that all the credit was not given to Sully, the point is made that it was a combined effort of the pilots, first responders, and everyone involved in the rescue that made this event not turn into a disaster.

The film vacillates between the heroic landing and the life that Sully must now endure, he is now a hero in the face of the public, but in his eyes he was just doing his job. He used his over 40 years of aviation experience and gut instincts to nail the landing and do what he knew was right in order to save everyone. Sully remains uncomfortable with the limelight and when he walks into a NYC bar and sees his face all over the television, he almost doesn’t want to look up and see the news. He can’t seem to contend with that fact. The bartender quickly recognizes him and serves him a drink aptly created after the incident, a grey goose on the rocks with water, of course. We get light moments like this throughout the film, but the majority of it is tense and a bit nerve-wrecking, despite the fact that we know everyone will survive.

Although he was considered a hero, Sully must face the National Transportation Safety Board and withstand the second-guessing of his actions by investigators Charles Porter (Mike O’Malley) and Elizabeth Davis (Anna Gunn), who believe that he could have gone back to La Guardia without endangering everyone onboard by performing an emergency water landing. The courtroom scenes despite being repetitive were pivotal in helping the audience understand that what Sully did was the right thing and that without his quick-thinking actions it could have been a national disaster.

Hanks delivers on every level, his performance was subtle and nuanced. There was no dramatic breakdown, or moment where he empties out the mini-bar, instead we get the feeling that Sully is an everyman type of guy who loves his wife and family and just wants to do his job. Hanks remained calm and collected and didn’t over-perform the role, which in this case completely worked. Hanks’ performance took me back to the years where it seemed that he was winning an Oscar every year. It is likely that he could get nominated for his portrayal and it will be well-deserved.

Eastwood hit it out of the park with this one and I enjoyed every minute of the film. This movie deserves to be seen and if you enjoy dramas Sully is the one to watch.