The movie genre of forty something women coming of age has hardly been touched in Hollywood. Wait… that’s because older women should have their lives figured out while living in their white-picked fenced homes along with their beautiful Christmas card worthy family. Therefore the movies that could fall into that category are almost absolute. Sisters takes that notion and flips it on its’ head, giving viewers a funny, authentic and fresh look at women trying to find themselves while having a blast on top of it.

The premise of the film is simple, sisters Maura (Amy Poehler) and Kate Ellis (Tina Fey); go back to their hometown of Florida when they learn that their parents Bucky (James Brolin) and Deana (Dianne Wiest) have sold their childhood home. Although they are upset about their parent’s ability to just sell their home and all their memories without consulting them, they must go back to their old rooms and get rid of all their junk. I mean all their priceless 80’s items, such as their Care Bear pajamas, fuzzy slippers and pink dial-tone phone and boom box. 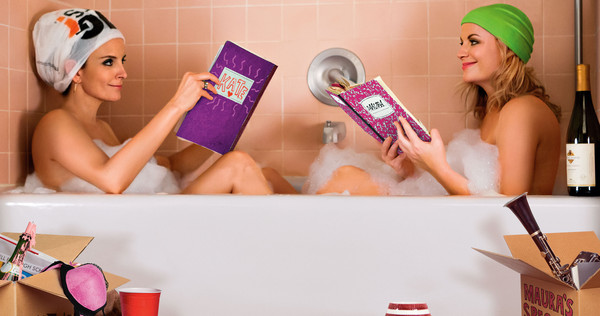 Maura is the more responsible one of the two sisters and walks around with inspiration note cards as a way to lift herself up from her divorce. On the other hand Kate, an aesthetician and hairdresser, can barely hold down a job and her own college-aged daughter Haley (Madison Davenport) can barely trust her to be a dependable mother.

In their childhood rooms, they drink copious amounts of wine out of teacups (naturally) and in reading out loud their old diary entries realize that the two sisters had the exact opposite experience in high school. Maura worried way too much about other people, she was the girl who held people’s hair while they puked at parties, while Kate was the life of the party, the girl who once scaled her parents’ fireplace in a drunken night. In that moment, they realize what they have to do; they need to throw one last Ellis Island epic party at their home.

Maura gathers up the nerve and invites over her cute neighbor James (Ike Barinholtz) and decides she will try to flirt with him and have a wild night for once. She also appoints Kate as the “party mom,” meaning she will have to make sure the house stays clean, no fires, no running through walls and of course will have to hold people’s hair while they puke, just like she did when they were teenagers.

Poehler and Fey are our generations Laurel and Hardy, they work so funnily against each other, that having one without the other would seem unfathomable. Their comedic timing is right on the mark and I found myself literally laughing out loud through so many scenes from beginning to end. The jokes worked well, they weren’t too crude nor were they too safe, they were just right for this type of movie. Had it gone either way, it would have felt either awkward or boring.

The cameos were excellent from Maya Rudolph, the high school mean girl, to John Leguizamo, the ex-hot cool guy who now just hangs out by the liquor store and John Cena, the stone faced drug dealer. Bobby Moynihan stole many of the best scenes, as the guy who tries so hard to be funny and liked, but can’t seem to get it right. I can see him transitioning from Saturday Night Live to film anytime soon.

What I liked about the film was that these two women never needed to find a man to complete their lives, all they needed was the love and support of their sister. They were also never dumb-downed; instead they were smart, funny and witty.

This is not an Oscar-worthy movie of course, but it is the kind of movie that whenever it is on TV I am sure I will watch. Sometimes those are the best kinds of movies because they withstand the test of time and can always make us laugh. If you are not in the mood to wait in a huge line for Star Wars this weekend, then go see Sisters, you won’t regret it.

Hulu’s Only Murders in the Building is about a rag tag group of sleuths who get together to try to solve a murder that occurred in their luxe NYC high-rise. All while making a podcast in the process to document their findings. Steve Martin, Martin Short, and Selena Gomez, make an unlikely detective trio, but the three of them play off one another in a witty and funny way. The dialogue is hilarious and is so very Steve and Martin; two actors whose humor I have always loved. What I like about this show is that it reminds me of a throwback to old Hollywood mystery movies, the ones that have humor and suspense mixed into it. Each scene is precise and there are no fillers, therefore no time is wasted. I enjoyed the fact that every time you think you know how something will end with the story, the show quickly spins you around and throws you for a loop. If you are looking for a show that has humor and mystery and you love true crime podcasts, then this one is for you. Who else loved the Arconia gang?
In this YouTube day and age, there isn’t a day that goes by where we are not lured by clickbait. We see an attention seeking headline and we click and just like that we have succumbed to the lure. Netflix’s new show Clickbait does just that; grabs our attention and leaves us hooked. Nick Brewer is a normal guy with a beautiful family and then suddenly one day he is kidnapped, and his face plastered all over the internet. The kidnappers threaten to kill him when the video reaches 5 Million views.
Native Americans are rarely represented in the media, other than the typical storylines of destitute and sadness. In Taiki Waititi and Sterling Harjo’s new series, Reservation Dogs, we get a look at reservation life in Oklahoma. It’s real, raw, and completely hilarious in that dry sense of humor type of way. The show is about a group of teenagers and the mischief they get into, and with each episode they mix in their Gen-Z world with stories that involve the elders of their community. The stories that play out are warm and endearing, for example Elora Danah wants to leave and go to California to explore life, and her father tells her that she will come back because she will miss exactly what she’s trying to escape. It’s a concept that no teenager will understand until they get older.
Hulu’s Nine Perfect Strangers is a mix of Big Little Lies and White Lotus, sprinkled with a bit of Clue. The whodunnit vibes and tension can be felt throughout the show, but it is not specifically a murder mystery. Nicole Kidman stars as Masha, the owner of Tranquillim, an expensive and elite retreat for those who want to unwind and come to terms with their issues. Many think they are there just to chill out and relax, but what they don’t know is that Masha has hand selected them and is looking to heal them with her own new age methods.
If you missed Season 1 of Ted Lasso, well then now is the time to start Season 2. Lasso is wholesome to an extent and a fun and easy show to watch. Which is kind of a nice break from all the crime and horror filled shows that pervade our television screens. Jason Sudeikis stars as Lasso, the American coach who is sent to England to help guide a failing soccer team, he is hilarious and filled with a plethora of dad jokes. He has so many good jokes and he slips them in ever so slightly, so it helps to pay attention when he speaks. This is a great one for any sports lover as well, as they show the camaraderie and sportsmanship that it takes to be a professional athlete. The show itself has taken off with professional coaches and athletes because it encapsulates what it means to be in the thick of it and playing on the field. Lasso is charismatic and sweet and will win the heart of any viewer. I love all the characters and find myself laughing from beginning to end. Check this out on AppleTV+. Who else is a Lasso fan?
an Murphy just turned the American Horror Story franchise on its head by making a collection of short stories to bide our time before the new season. One of my issues with AHS has always been that the storylines falter mid-way through or they try to do too much and the story always pays the price. But with this new season, we get one story per episode (except for the murder house, which had had three) and that’s it. This allows them to give us a quick and creepy story and add in lots of different actors throughout the season. I think people are either going to love or hate this. I enjoyed it because it was a quick and easy way to get my AHS fix without having to commit and get involved in a lengthy story. I didn’t think every episode was perfect, there were some cheesy B-movie type ones, but for pure entertainemnt, I recommend it! Who else watched this and did you love or hate it?