For Judd Apatow’s film Trainwreck, he coupled up with Amy Schumer who wrote the screenplay, to deliver a film that is much more heartfelt and poignant than any of his other films.

I have to say I absolutely adore and love Amy, I feel like she is a voice for all us thirty-something’s out there. After seeing it though, I left feeling disappointed and let down. Maybe I had too high of expectations, but I was not really feeling this film. I wanted to like this so bad, but unfortunately it was not one of my faves.

The movie centers on Amy and her relationship with her father Gordon (Colin Quinn), who is suffering from multiple sclerosis. She and her sister Kim (Brie Larson) were raised by their father and were always taught that monogamy was an impossible goal to achieve in relationships. Amy carries that lesson with her, but her sister does not. She is coupled-up with Tom (Mike Birbiglia) and is helping him raise his son Allister (Evan Brinkman), who is a little eccentric and odd, but totally sweet. 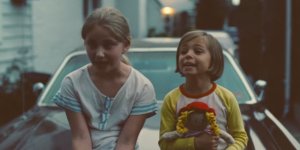 Amy writes for a men’s magazine and is asked to do an article on an up-and-coming sports physician Dr. Aaron Conners (Bill Hader). Dr. Conners has worked on a bunch of athletes including LeBron James, who stars in the movie as himself, and while working with athletes he is given many perks like free games and introductions to hot women. As Amy goes behind the scenes with him, she sees how cool in a way his life is, yet she still sees him as kind of a geek. This doesn’t stop her though from going out for dinners and drinks with him, which all lead to heavy flirtations and moments of hooking up. Amy does all this because this is what she is used to doing with men. But soon Aaron starts to kind of like quirky Amy and this leads her into a tail spin that she is not used to because as her father tells her in more ways than one that monogamy is not realistic.

Throughout the film, Amy battles with her inner conflicts to go back to being the wild girl she used to be, to maybe deciding to settle down with someone. He is not sexy like John Cena, who she hooks up with in the beginning of the film, nor is he the best in bed, as her sister puts it “you don’t want the best sex you ever had guy” because he is probably in jail. I thought that line was priceless and cracked me up. But the point is she can never be with those types of guys again if she wants to settle down and have a normal relationship with a guy who will respect her.

This movie had so much potential, so much that I could feel it and grasp it with my fingertips, but unfortunately it was lost with all the cameos of athletes and Saturday Night Live actors. LeBron James had so many lines, I just couldn’t take it anymore. He really needs to stick with what he is the king of, which is basketball. Please stay on the court and off the sound stage.

Bill Hader is one of the funniest actors out there and I felt that I wanted to see him deliver a little more humor into the role. I think he did a great job with what he was given, but I wanted to see him up his game just a tad more. I think if they stopped focusing on all the scenes with athletes and corny moments, he would have had more to work with to his advantage. 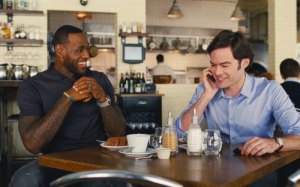 I did like Vanessa Bayer in it, who played Amy’s annoying co-worker. Seeing her do the transition from SNL was great, much better than the other people who just did quick cameos. Larson was great too, she always delivers and I enjoy her dead pan hilarity.

Amy though, despite me not totally loving this movie, was still good, the way she delivers her always made me laugh. I just wished they would have stuck to making this more of a funny movie and had given us less serious moments that just felt so boring in the end. It’s like they would set up the audience to laugh, then totally bring us down and depress us. I guess the trailer confused me, I thought I was in for a funny movie.

I mean my girlfriend and I made this our girl’s night movie of the week, we had expectations. And yes we snuck in some wine and red vines, we were so ready to laugh and ended up falling short in that department. Apatow has given us these funny movies with male-centric roles, so to see a female led one was really appealing to me. I hope that Schumer and Apatow make a do-over movie and come up with something better because I do believe they still have it in them.

Overall I thought this was an okay movie, one that you should watch when it comes up on Netflix or HBO for free. What did you guys who saw this think of this movie?