This week’s episode of Game of Thrones was mind blowing to say the least. I think some of the scenes that went down (I won’t write it here in case someone is not caught up) broke the internet. I mean I’m not going to lie I was upset with that big moment that happened, which deviated completely from the book. Oh wait, I thought they were book changes, but the producers of the show have confirmed that George RR Martin said these things would happen. Ok, that really makes me mad, how do you spoil a book like that! Come on George, I thought you primarily wrote the books to tell a specific story and make readers excited, not to please HBO? I won’t rant anymore about that! But overall an interesting episode that made me both cry and yell in excitement!

Let’s dive in and talk about what went down (screaming internally).

1. Arya following Ser Meryn Trant in Braavos. Arya is right where we left her in the last episode, she is trying to stalk and watch for the right time to kill the gambler with poison. On her usual trail around Braavos with her oyster cart, she spots Ser Meryn Trant. He is with Mace Tyrell, who has been sent there by Cersei to try to borrow funds from the Iron Bank. We get these weird moments when the two of them catch each other’s eyes. Does Ser Meryn remember her face? The possibility is there. Remember that Ser Meryn is an evil man, Cersei’s right hand man who will do anything she asks of him. She follows him into a brothel, and by the way Arya knows all the women who work there from selling her oysters, her networking  kind of gives her access into anywhere she goes. She follows him into a room where he is being presented with women, all of which he thinks are too old. At this point, we think that Arya is going to come out of hiding and he will pick her, but instead he picks another young girl. He is disgusting! When she goes back to Jacqhen, she tells him the man wasn’t hungry. Yeah right, it is obvious that he doesn’t believe her.

2. Jon Snow walking the Wildings through Castle Black. Now this scene was pretty cool, in the books this was exciting to read, so I was looking forward to seeing this play out on the show. Defeated and beat down by the White Walkers, they make it back to Castle Black, where Jon Snow has decided they will walk through the gates and eventually help him fight the White Walkers. This is met with consternation by many, as just a while ago they had been fighting these people and they killed many of their men. Remember Grenn? How sad! But here Jon Snow is letting them through, so of course some of the men of the Night’s Watch are upset. This is kind of like the civil rights movements of the 1960’s, but for Wildlings. As Alliser Thorne mentions, Jon Snow’s kindness may get him killed. But Jon and the men need these Wildings, if the White Walkers come and attack (which they will because hello it is Winter now) they will need their help. 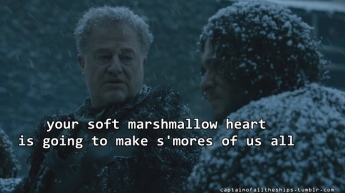 3. Doran pardoning Jamie and Bronn. After all the hoopla that has been going on with Jamie and the people of Dorne, the King has a dinner with them to hash things out. He tells Jamie that he will let him go back to King’s Landing with Bronne, but not without a slap from Prince Tyrstane. Since Dorne has a seat on Tommen’s small council, which was previously filled by Oberyn, he decides that Trystane will take his place and go back with Myrcella. This whole Dorne scene was boring. I really like Trystane in the books and the show didn’t do him much justice. He also never went to King’s Landing, they sent one of the Sand Snakes instead, so we shall see how this plays out.

4. Ramsey raiding Stannis’ camp and destroying his supplies and food. Stannis and his camp are near Winterfell, not super close, but close enough for Ramsey to attack. He sends a flaming horse in, which destroys their food supply and this only angers Stannis more. In his anger, he has many of his men killed for this attack. Remember that back in the day Stannis almost died of starvation, so he has been through this before, but Davos saved him by bringing him onions to eat. Which is why he knighted him. So this whole scene was important because it serves as the catalyst for what happened next. 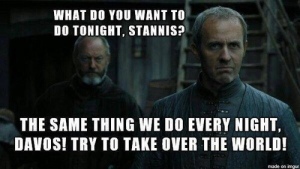 5. Davos being sent away for supplies. Again, history is repeating itself. Stannis decides to send Davos back for food. Davos suggests taking Shireen back, because little girls should not be surrounded by war. In reality he sent him away because he knew Davos would never consent to what occurred after he left. When he leaves, he goes to see the Princess and gives her a little wooden stag as a present for her. His love for the Princess is endearing and those scenes literally warmed my heart. And how often do our hearts get warmed on Game of Thrones? Umm.. almost never. Also, whenever there is a nice scene on the show, that usually means something bad will happen.

6. When Shireen told Stannis she would help him. As we have been seeing this season, Stannis has become more affectionate and warm to his daughter. Something we rarely see from him. Also, their relationship is not mentioned a lot in the books, so part of me this season has been feeling odd that they keep showing her so much. Dammit! Like I said before once they start showing the sweet side of someone, then that means the ax is soon coming. In their discussion he tells her, “A man must fulfill his destiny and become who he is meant to be, however much he may hate it.” What the hell is that supposed to mean to a little girl. Looking lovingly up at her father, she tells him she wants to help anyway she can. Not knowing that she just gave him the green light to do something awful to her.

7. Shireen being sacrificed to the Lord of Light. As I have been looking for pictures of this moment, I keep getting teary just thinking about what happened to poor little Shireen. I can deal with killing off people and adults, but little kids no I cannot handle it. Once she tells her father that she wants to help, she gets carried away by some of his men. As she is being walked, she sees the pyre and realizes it is for her. She starts screaming and yelling for help, but no one comes to her help as she is being taken and tied to the pyre. Melisandre starts proclaiming her as a gift for the Lord of Light, aka the Red God, as a sacrifice to let Stannis reach Winterfell and proclaim his right as the King. At that point, her mother changes her mind and asks for help, but nothing can be done to save Shireen. She screams and yells and is unlawfully killed. #stillcrying

8. Jorah in the fighting pits. Just as we are reeling in the death of Shireen we quickly move on to Daenerys’ story. Ugh, damn you GOT, just let me mourn for a bit. She finally attends the re-opening of Daznak’s fighting pits. Hizdahr tells her that she must clap and be excited for this moment. But she knows that this goes against all her beliefs. She wants to save people, not pit them against one another to be killed for entertainment. Along with her, is Tyrion who is now part of her crew and of course her main squeeze Daario. The banter between all this testosterone is pretty entertaining, Tyrion tells Hizdahr, “My father would have liked you.” Of course he would have, they are both cunning and evil. In that moment, the first fighters come out and it is none other than Ser Jorah himself. Dany is shocked and saddened that he is fighting. In all of this ruckus Ser Jorah goes medieval on his opponent’s ass. Then suddenly he throws a spear right at Dany to kill a Sons of the Harpy attacker that was behind her. He saved her, he saved her! He does love her!

9. Sons of the Harpy attacking in the pits. When Ser Jorah saves Dany, it is obvious that his love for her is still there and that he was willing to die for her. In that moment, mayhem ensues and the Sons start to appear out of the audience and around every corner. One of them kills Hizdahr, just like that he is dead. Ser Jorah goes to help Dany and offers her his hand. I think that totally melted his heart. Now they are in the middle of it all, Dany and Missandei hold hands and prepare to be killed. OMG so much is happening, what the hell is going on!

10. That moment when Drogon saved Dany. Then as all hell as broken loose, Drogon, her missing dragon, comes out of nowhere and saves her. This part is straight out of the books, it was one of those moments I had to read over and over again. Even though I knew it was coming, seeing it was still exciting. The dragon starts torching people left and right. Tyrion looks absolutely stunned to being seeing this in person. When Tyrion was growing up, he always loved dragons and dreamed of riding one, so you can only imagine what he was thinking in that moment. Dany comes up to Drogon and they look at each other in a weird, magical and maternal moment. She then climbs on his scaly back and they fly away. WTF just happened!! OMG, OMG, Shireen died and Dany was rescued by a dragon all in one episode. 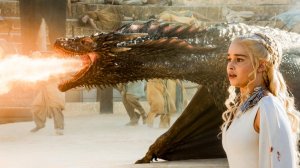 Overall, that was a great episode, these are the types of epsiodes I except from Game of Thrones, so I am glad they delivered. Next week’s title of the episode is called “Mother’s Mercy,” that can mean a few things, Dany’s bond with Drogon, Cersei’s with Myrcella and Tommen. We shall see next week in the finale. What was your fave or least fave part of the episode?

And of course the interent was filled with memes once again. And Kerry Ingram who played Shireen tweeted some cute pics as well. We will miss you little Shireen!! 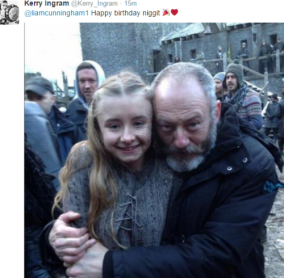 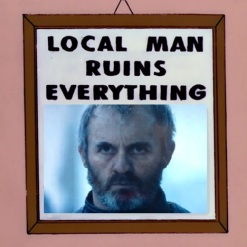 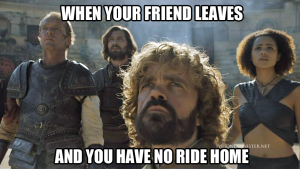