I know I am kind of late on this, I have had the flu for like 10 days it’s been horrible. I think I went stir crazy at my house this past weekend. But I did get to finish the last Game of Thrones book so I am super stoked to see the show this seaon. Anyways back to the topic, I just wanted to do a quick recap of the best moments of the Saturday Night Live 40th reunion. It was 3 hours long, which honestly I can’t remember any shows that have been that long on TV. Some of it was totally funny and other parts just felt really long and useless.

I have been a fan of SNL, I would have to say my whole life and really became a dedicated watcher as a teenager. In the days before DVR’s, I remember being 14 and staying up what I thought was late to watch SNL. The audience was packed for the reunion with A-list celebrities like Michael Douglas, Steven Spielberg, Ed Norton, Bradley Cooper, Larry David, Paul Simon, Paul McCartney and the list goes on and on and many who performed or announced musical acts in between on the show. I love seeing celebrities laughing and enjoying themselves like normal people, am I the only person who feels like this?

Here are my top 12 best (and one worst) moments of the SNL 40th reunion in no particular order. And basically you can get the gist of the whole show in less than 3 hours.

1. Melissa McCarthy as Dan Foley, Chris Farley’s character of the “guy down by the river.”

3. Kanye West performed upside down and then Sia appeared with a giant wig. Am I the only who loves both of them?

4. Emma Stone paying homage to Gilda Radner, the more I see Emma the more I love her.

5. The Californians skit had Taylor Swift, Kerry Washington and Betty White and Bradley Cooper finished it off perfectly.

8. Fred Armisen and Kristin Wiig doing their funky performance as Garth and Kat, their songs that have no rhythm or meaning and are pretty hilarious.

9. Seeing the SNL Audition tapes, I love seeing those and seriously how young did Jimmy Fallon look?!

10. Will Ferrell and Anna Gastyer doing their musical act The Culps, I think that was one of my fave skits.

11. Last ,but not least WAYNE’s WORLD! Party on my friends.

12. The worst had to be Eddie Murphy back on stage at SNL for only like two seconds. It was weird and he should have done a funny skit or something for old times sake. 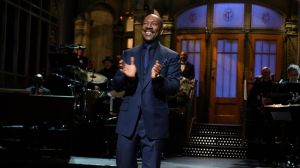 Did you guys watch and if so what did you think? What is your fave SNL skit or comedian?

(This is my fave)