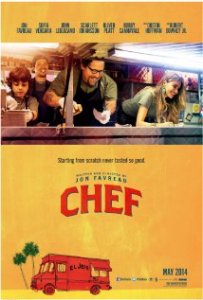 Watching Jon Favreau’s film Chef, almost felt like eating a sumptuous full course meal at a 5 star restaurant. He starts off with the appetizer or an amuse-bouche you could say, laying down the foundation of the story, and providing some funny anecdotes. He then moves on the next course, slowing refining the narrative like a warm soup. From there he moves on the main course, the bread and butter of what is at the heart of the entire movie and finally giving viewers a delicate dessert to top off the experience. What you will not get with this meal is an elaborate, over blown, action film with crazy special effects, so if that is what you are expecting than realize that this is not Favreau’s Iron Man type of movie. 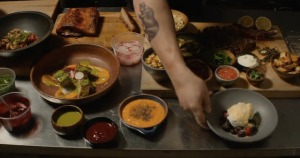 The film is about a renowned chef in Los Angeles, Carl Casper (Jon Favreau) who is the typical executive chef; he has a big ego and the temperament of an artist. What he lacks in working at a restaurant owned by Riva (Dustin Hoffman), is free reign to cook as he pleases and create dishes that truly inspire him. Molly (Scarlett Johanssen), the restaurant’s hostess and wine sommelier of sorts, sees him as the badass chef that he is and tries to pull that out of him, the best she can. His ex-wife Inez (Sofia Vergara), a successful woman in her own right, keeps nudging him to open up his own food truck and cook food that he believes in. They see each other because they share custody of their son Percy (Emjay Anthony), who wants to be part of his dad’s world so badly and hates being in the middle. Yet he handles it like any kid born in this millennium, he negotiates with his parents through his iPhone. 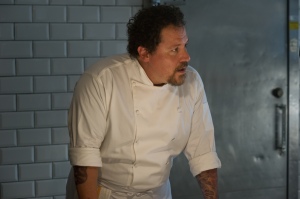 When food critic Ramsey Michel (Oliver Platt) comes into his restaurant to eat, Carl comes up with a whole new menu to tantalize him with, but unfortunately Riva will not let him execute it out. Instead he serves what is on the menu every night; it is cooked to perfection, but lacks any imagination or heart. When the review goes out, it crushes him and he takes to Twitter haphazardly and ends up starting a feud with the food critic.

He has his Jerry Maguire moment, where he stands up tall and asks his other chefs to join him, to which the sound of crickets appears. Only one of his line cooks follows him Martin (John Leguizamo) and they take off on a journey, a culinary voyage of sorts to Miami where he decides to finally open up a food truck. He takes his son along for the ride and Percy helps to put his dad on the map as a revived culinary star by using social media in a really smart way. He takes to Twitter, Vine and Instagram and gains a whole new following. Kids these days are much smarter and tech savvy then generations before them and this is apparent through Percy. 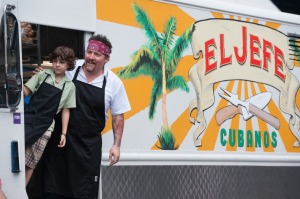 What ensues from here is fun to watch and the viewer gets to go along with Carl as he not only rediscovers himself as a born-again chef de cuisine, but as the father he was always wanted to be. The relationship and bonds that form over food are endless and that is what truly is at the heart of this story.

I loved watching him cook the food, perfectly stacking the pieces, to create a beautiful dish. When he made a grilled cheese for his son, he didn’t just make a basic one with white bread and Kraft cheese. Instead he uses an ooey-gooey fancy cheese on top of artisan bread, perfectly made on his grill, with edges that look crisp and browned and a sandwich that looks heavenly. Now who wouldn’t want a dad who is a professional cook?

I also liked seeing a movie that seemed to embody what chefs today have become, some are almost exalted to rock star status with hip new restaurants and have the swagger and tattoos to boot. With the character of Molly, it is evident that she sees his potential and his passion for food seems to turn her on to the point that she is almost a food groupie. What better food groupie (no, not the fruit and vegetables food group kind) to have then her, even though she was in the movie only sporadically she was just as vibrant and sexy as I have ever seen her.

Favreau worked with one of the most famous food truck chefs, Roy Choi, to learn the ropes of running a truck and being a chef. Choi made it a point to show him how real kitchens look and the care for the details are evident in the film. In an interview with LA Eater magazine, Favreau says he took into account the first thing that Choi said to him, “’When a chef sees a bag of shallots he gets excited because they know they’re going to get to peel them all,” and I really think the essence of that sentence alone was captured in the feeling of the film. 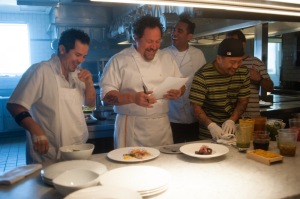 (With Choi on set)

The story was warm and thoughtful and I really enjoyed the simplicity of the film. Yes, we know that Favreau can make entertaining films like Iron Man, but he is also able to push that away and create something that is simple and fun to watch. This film turned out just right, simple, fresh and with a focused story. If you are a foodie, then you will drool over this film or if you are just in the mood for a heartfelt comedy try this one on for size.