The U.S. container ship Maersk Alabama was taken hostage in 2009 by Somali pirates, the ship was on route to sail through the Gulf of Aden and around the Horn of Africa. Commanding Officer, Captain Richard Phillips was in the thick of it all and lived to tell his heroic tale.

The drama that ensued on this fateful trip inspired the movie Captain Phillips, directed by Paul Greengrass who has a journalism background himself, had a lot of elements of realism from a documentary standpoint. He blended the film with a realistic vantage point and action packed sequences.

The film gives the viewer a lot of nuanced details about the two main characters lives. As Captain Phillips (Tom Hanks) starts his journey, with a nagging suspicion of piracy, since he had previously received alerts that there had been threats in the area, he sits down to write his wife (Catherine Keener) a small, simple email. As he writes his note, his feelings of trepidations come across, yet he leaves her a simple message telling her he loves her, almost ominous, yet heartfelt. In that moment alone we see a glimmer of stoicism and a peek as to who he is as a person.

The leader of the pirates is Muse (Barkhad Abdi) and we also get insight into his life as well. The first shot of him is on the beach of his little town, with tons of people scrambling around. It is obvious he lives in a world much different than Capt. Phillips. In a sense, he has lived in a world where he has been brainwashed almost naively to believe that all Americans are millionaires and that alone, along with his boss’s threats, motivate him to act on his impulses. 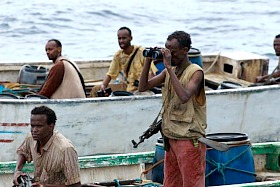 From there their two worlds emerge upon the ship as Muse and his band of marauders enter Phillips’ ship and threaten them with attacks for money. Captain Phillips is taken hostage and the rest of the film is devoted to the nightmare that was his capture and release.

Movies that are based on real-life events or topics need to have a story that builds connections, develops characters and makes the viewer sit on the edge of their seats. This movie both succeeded and failed in this department.

When a movie is based on a real life story or topic, for example, let’s take baseball movies, if the whole movie was like a baseball game it would be real boring, but what makes a good baseball movie like Bull Durham and Field of Dreams so good, is that it gives us great characters with back stories, character development and a story that connects with the viewer on some level.

The first half of the movie, I was immersed, I felt the tension with the hand-held footage and even though like the Titanic, I knew what was going to happen, I was still on the edge of my seat. At one point Muse and Captain Phillips get into a dialogue that is intense and interesting. Captain Phillips tells Muse that he has 30 thousand dollars in the safe and that he can take it all to which Muse says, “Thirty thousand dollars? What am I? Do I look like a beggar?” Muse believes he deserves top dollar and thinks he can get millions out of them. Now this whole part of the story was captivating and entertaining and lead the viewer to believe that so many different things could happen from this point.

The minute he entered the tiny vessel with his captors, the movie was like a fact telling docudrama. It was boring and honestly I could have been fine with just having watching the documentary on the History channel.

Hanks did a great job as the Captain and Abdi, I believe he deserves every praise he has received because he played that character with such grit and depth that he did seem like a real villain. Those two really stood out and honestly had it been another actor playing Phillips, this movie may have not received the recognition it did. Hanks amazes as always and he really showed emotion and played Phillips like a real human being, not as an over hyped up hero.

I would have perhaps liked to have learned more about the bosses that Muse was entangled with, at least a few shots later in the movie focused on just them would have satisfied me. The story of Captain Phillips and his wife was very miniscule in the matter of things; it would have been nice to see more of that story. I felt like I was grasping for straws and getting nothing back in that arena. If they decided to show her, then they should have acted on that more or simply omitted her scene from the story.

I will not argue the fact that Captain Phillips is a well made movie, Paul Greengrass knows how to direct an intense, action flick, but this movie lacked in other areas for me. The pacing of the film is off, which further disconnects the viewer and the narrative itself lacks creativity and depth.

If you like action movies, then there are snippets of this that you will enjoy, but if you want to understand the entire story and really get into it, then it may be best to read the book. Would I see this movie again? Most likely not, simply said it did not entirely float my boat. 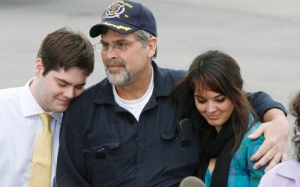 (Muse, what an uncanny similarity)

ABC’s Big Sky unravels a drama when two young teenage girls go missing in the beautiful state of Montana. The girls were on their way to see one of their boyfriends who lives in town. His mother, who is played by Katheryn Winnick (yes Lagertha!) coincidentally is a detective and his father, an ex-cop and her ex, played by Mr. Cruel Intentions himself, Ryan Phillipe, go on a hunt to find them. The two own a detective agency along with another woman who is also dating the father. Confusing right?
In HBO’s Industry, sex, drugs, and banking (yes, finance) take on a whole new landscape. A group of recent grads are accepted into a leading bank firm in London, where only the strong will survive. At the end only a handful are selected to remain full time. Each new grad is sent to a different team, each with its own chaotic and frenzied attitude on making money. This show is nuts. You think you are watching a show about trading and banking, and it turns into a whirlwind where every person is trying to survive to save their job. They party and stay up late, do copious amounts of drugs, and in the end try to close million dollar deals with massive hangovers.
I watch a lot of shows, if you haven’t already guessed that, and let me tell you so many of them have fantastic first and second seasons, and from there it all usually goes downhill. You get wrapped up and excited for each season and sorely disappointed when storylines falter and too many characters are introduced. This is not the case for Netflix’s fourth season of The Crown, instead the story builds, the characters are beautifully carved out with succinct development, and there is a cohesive arc to each story.
I love a good Christmas movie, I mean who doesn’t? But this year especially Christmas movies feel even more special to watch, as they take us back to a time when things felt normal and add a little magic to our days. I love the feeling of nostalgia and the memories that come back from watching them.
The taco is non-threatening, easy to eat, and the bloodline that runs through every street in Mexico. Although simple in nature, in Mexican culture there is a million different types of tacos that can be consumed, and each fulfills a different need and desire. Some for eating with family, some for a quick bite, and some to be enjoyed after a long night of drinking alongside a Coca-Cola (in a glass bottle of course).
I have watched 99 percent of all Ryan Murphy shows, and as much as I am a fan, many of them have issues; that being said I was highly surprised that in his Netflix show Ratched, we don’t run into so many of the usual stumbles. The fashion and the sets are highly stylized and beautiful, that blue is intoxicating! Each scene could have been a photograph. The story is interesting and creepy, Ken Kasey’s infamous character is back in the prequel version of One Flew Over the Cuckoo’s Nest, and we get to know Mildred Ratched before she becomes the notorious villainous nurse. I was hooked from the beginning and couldn’t stop watching it. If you are looking for a binge-worthy show this is the one. If you watched it, what did you think?