Mad Men Recap: Season 7, Episode 3: What Don Wants, He Sort Of Gets

This week’s episode, “Field Trip,” illuminated for viewers whether or not Don Draper would return to work for SC&P. What Don did at the end of Season 6, when he admitted his life story to Hershey and basically told them that they did not need an ad campaign, and caused the firm to look at him differently. His erratic behavior partially caused by drinking too much was so unsettling, yes even to the other folks who drank almost as much, that he must take a leave of absence from the agency. The length of this leave has been unknown since the beginning and in this episode Don has finally lost hope of ever coming back. Despite this knowledge, he wants to work and he feels absolutely ready to get back in the swing of things, whether other people agree or not.

I am going to open up a Hershey kiss in memory of last Season and digest what happened this week. Maybe I should make it a gum drop? 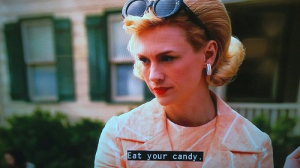 Megan’s agent calls Don and tells him to come to LA and pretty much get his woman in check because she is flying off the handle trying to get extra auditions. He shows up unexpectedly in LA, buys her some nice flowers, gives her some old fashioned lovin’ and proceeds to confess that he has been on leave from the agency for several months. Needless to say she is very upset and he argues that he has been “good” and that he hasn’t been drinking all that much. Uh…huh. 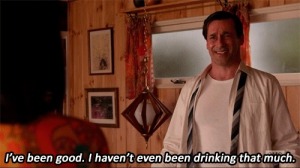 Don seals a deal with David Wooster, the guy he had lunch with last week, and is asked to come work for them. In an effort to make a decision, he goes and sees his old friend Roger Sterling. He says, “If you want to come back, come back.” Really? Just like that and Don takes it as an offer to come back to his old stomping grounds. 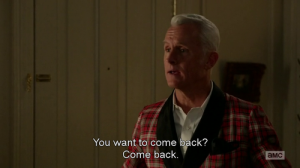 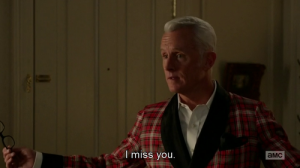 Then the moment us fans have been waiting for, the return of svelte and beautiful Betty Draper. Notice I didn’t use the word nice or kind to describe her. She decides to take her son Bobby up on his offer and go on his school field trip to a local farm with him.

On the school bus she meets his teacher who has her shirt slightly unbuttoned, revealing some of her cleavage, this leaves Betty perturbed as usual. Anyone fun, cute or “cool” and “hip,” just annoys the crap out of her. We are seeing more and more that Betty is old school, she doesn’t wear mini-skirts like Megan and she never lets her children assume that she is their friend. Continuously we see on this show the theme of old versus new, some stay behind rigid in their old ways, and some are progressive and forward thinkers. This could be said, I am sure about any generation out there in history. 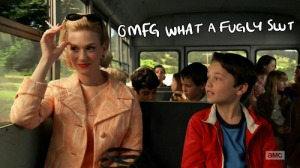 Down at the farm, Betty decides for a split second to be a cool mom and volunteers to drink the freshly pumped cows milk straight out of the bucket. 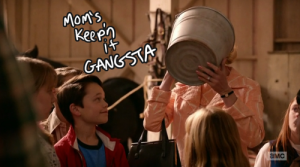 They sit down on the grass to have a nice lunch and bond, but when Betty returns she asks Bobby for her sandwich and he tells her he traded it for gumdrops. This lights the fire under her and she tells him he better eat every gum drop, to which Bobby painfully eats. Now this scene is so pivotal and tells so much about this time period. Mothers didn’t baby their children and honestly, as much as I hate to admit it, reminds me of one of my own grandmothers. She was nice sometimes, but lots of the other times she could be callous and make you feel like a stupid kid. Betty embodies the spirit of Depression era children who grew up to be adults in the 60’s. They were no nonsense individuals and many viewed children through the idiom of children should be seen not heard. As much as she wants to bond and let her inner-child free, her own judgmental personality and rigidness does not allow her that freedom.

(That look says it all, you are in BIG trouble)

At home, Harry asks Bobby how the field trip went, he responds in the saddest way possible, that he wishes it was yesterday. In other words, the day went completely wrong and according to his mother he ruined it. 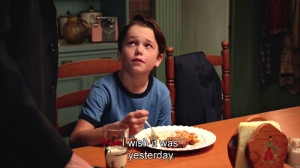 Back at SC&P, Don returns and apparently Roger never gave anyone the memo that he was coming back. No one is happy about his return, not Peggy, not Joan and especially not Lou Avery. The art department guys are the only ones who seem to be happy to see him. Perhaps they are the few that see the lack of vision that seems to be going through the office.

The head honcho team assemble to discuss what to do. The whole scenario is like a bad breakup. They know that they do not want him there, but they don’t want anyone else to have him. Since he has a no compete clause in his contract, that means they would have to buy him out in order to send him away. He is expensive and costly, instead they offer him his job back. The job offer stands that he can no longer drink in the office, all his ideas will have to go through the head honcho group first and he will report to Lou Avery. 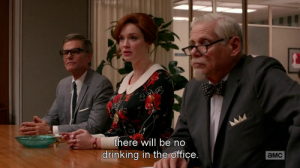 At this point, Don is screaming internally, but he says okay and he takes the job. Don is back and we will see if he can shape shift SC&P back to its’ old standards of work, if he can’t do it this time then he will have crashed and burned for nothing.

What do you guys think? Do you agree with his decision to stay? 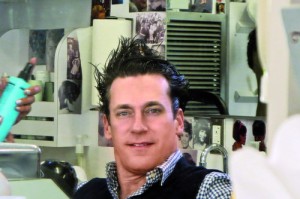 In this YouTube day and age, there isn’t a day that goes by where we are not lured by clickbait. We see an attention seeking headline and we click and just like that we have succumbed to the lure. Netflix’s new show Clickbait does just that; grabs our attention and leaves us hooked. Nick Brewer is a normal guy with a beautiful family and then suddenly one day he is kidnapped, and his face plastered all over the internet. The kidnappers threaten to kill him when the video reaches 5 Million views.
Native Americans are rarely represented in the media, other than the typical storylines of destitute and sadness. In Taiki Waititi and Sterling Harjo’s new series, Reservation Dogs, we get a look at reservation life in Oklahoma. It’s real, raw, and completely hilarious in that dry sense of humor type of way. The show is about a group of teenagers and the mischief they get into, and with each episode they mix in their Gen-Z world with stories that involve the elders of their community. The stories that play out are warm and endearing, for example Elora Danah wants to leave and go to California to explore life, and her father tells her that she will come back because she will miss exactly what she’s trying to escape. It’s a concept that no teenager will understand until they get older.
Hulu’s Nine Perfect Strangers is a mix of Big Little Lies and White Lotus, sprinkled with a bit of Clue. The whodunnit vibes and tension can be felt throughout the show, but it is not specifically a murder mystery. Nicole Kidman stars as Masha, the owner of Tranquillim, an expensive and elite retreat for those who want to unwind and come to terms with their issues. Many think they are there just to chill out and relax, but what they don’t know is that Masha has hand selected them and is looking to heal them with her own new age methods.
If you missed Season 1 of Ted Lasso, well then now is the time to start Season 2. Lasso is wholesome to an extent and a fun and easy show to watch. Which is kind of a nice break from all the crime and horror filled shows that pervade our television screens. Jason Sudeikis stars as Lasso, the American coach who is sent to England to help guide a failing soccer team, he is hilarious and filled with a plethora of dad jokes. He has so many good jokes and he slips them in ever so slightly, so it helps to pay attention when he speaks. This is a great one for any sports lover as well, as they show the camaraderie and sportsmanship that it takes to be a professional athlete. The show itself has taken off with professional coaches and athletes because it encapsulates what it means to be in the thick of it and playing on the field. Lasso is charismatic and sweet and will win the heart of any viewer. I love all the characters and find myself laughing from beginning to end. Check this out on AppleTV+. Who else is a Lasso fan?
an Murphy just turned the American Horror Story franchise on its head by making a collection of short stories to bide our time before the new season. One of my issues with AHS has always been that the storylines falter mid-way through or they try to do too much and the story always pays the price. But with this new season, we get one story per episode (except for the murder house, which had had three) and that’s it. This allows them to give us a quick and creepy story and add in lots of different actors throughout the season. I think people are either going to love or hate this. I enjoyed it because it was a quick and easy way to get my AHS fix without having to commit and get involved in a lengthy story. I didn’t think every episode was perfect, there were some cheesy B-movie type ones, but for pure entertainemnt, I recommend it! Who else watched this and did you love or hate it?
The Apple TV+ series Physical is a dark story about redemption and grit. Rose Byrne stars as Sheila, a 1980s housewife who is busy supporting her husband with his political desires and taking care of their young daughter. Meanwhile, she feels like she has nothing going for herself, and is battling bulimia. We see her stop at fast food chains and go through a whole ritual of binging and purging, all the while no one knows she has a problem, because on the outside she seems perfect. She randomly finds an aerobics class at the mall, and it becomes her lifeline to salvation. She is so good at it that she starts making videos, at a time when the VHS was just evolving into a staple in every American household. From there the show quickly unravels. We hear her inner dialogue through the whole show, she fat shames people and herself, and on the outside just smiles. The storyline is interesting and unique, add it to your list if you need something different!