Game of Thrones Recap: Season 4, Episode 2: A Toast to the Proud Lannister Children

Last night’s episode, “The Lion and the Rose,” which is the only episode this season written by the author himself, George R.R. Martin, should have given us a clue as to what was in store. Only someone as tied to the story as himself, could have written the story that ensued. The episode was mostly focused on the highly anticipated royal wedding between Joffrey Baratheon and Margaery Tyrell.

In the usual Game of Thrones fashion, a royal wedding never goes unharmed, if you escape unscathed consider yourself lucky and if you are an actor on this show and you are still alive after a wedding consider yourself fortunate.

Ok let’s talk about what happened last night, c’mon kids and join me.

The show opened with Ramsay Snow, that jerk, hunting down a servant girl with hounds and Theon Greyjoy in tow. His father, Roose Bolton, then comes to town and finds out what Ramsay did to Theon, you know cut off his junk, and is upset because he was going to trade him to the Ironborn in exchange for Moat Cailin.

Ramsay then proceeds to tell Theon what happened to his pseudo-brother Rob Stark. Another blow at Theon, who is visibly a fallen, distraught shell of a man. Roose tells his son if he wants to prove himself as more than a bastard, he should go out and find Bran and Rickon as they are rumored to still be alive.

Bran and his merry crew, Hodor, Rickon, Jojen and Meera, remind him that he must not spend so much time in the body of the wolf because in doing so it can cut off his human capabilities. He then finds a tree and gets a message from a 3-eyed raven that they must continue on North.

Tyrion fears that his family knows about Shae and he knows that she will be killed as his father told him to stop sleeping around. He sends Bronn to take her and ship her away, as much as it hurts him, this is the only way she will live.

Tyrion also sends Bronn to help Jamie with his sword capabilities and trains him how to reuse his left hand for fighting. He takes him to a secret spot where he usually goes to have sex with other guys’ wives. Oh how nice of him!

At Dragonstone, Melisandre has three of Stannis Baratheon’s men burned at the stake for disbelieving in the God of Light. She then goes to speak with Stannis’ daughter, Shireen, the little girl with a disfigurement on her face, and explains to her the differences between the Lord of Light and how the story of the Seven Gods is a lie. Hmmm, where are they going with this?

At the wedding breakfast, King Joffrey is presented with gifts, Tyrion gives him a book called, “The Lives of Four Kings,” and then he is presented with a sword made with Valerian steel. He proceeds to cut the book up and taunts his uncle even more. He then says that he will call the sword, “Widows Wail.” Oh how appropriate.

Now on to the juicy, meaty part of the whole show. After the wedding, the celebration is in full tow with contortionists, jugglers and musicians. Here there are several different mini-stories that are taking place. Cersei and her father talk to Prince Oberyn Martell and his lover. He explains to her in a condescending way how his people are quite different from hers and that fortunately her daughter doesn’t live in a place where women are raped and murdered. What a nice conversation piece that is, right?! 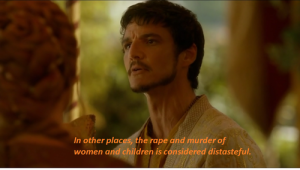 Jamie talks to Ser Loras who is supposed to marry Cersei and tells him that, “She’ll kill you in her sleep.” Cersei on the other hand talks to Brienne of Tarth and thanks her for serving Jamie and tells her that she believes she is in love with him. Basically these two are like stay away from my boo, girl he/she is mine.

During the celebration the entertainment is clearly boring King Joffrey, he throws coins at the artists and uses them as fodder for his own pleasures. He then commands five dwarf actors to reenact the War of the Five Kings. One of them being Rob Stark to Sansa’s dismay, the tension builds and we are beginning to sense that Joffrey has it out for his uncle. He tells him to join the other dwarfs, an obvious jab at him.

Tyrion insists he has had enough fighting for his lifetime. He tells him, “I think you should fight, this was a poor imitation of your own bravery on the field of battle. I speak as a first hand witness.” This is now a jab towards the King, who we know did no fighting at the Battle of Blackwater.

Upset he is, as Yoda would say, and Joffrey gets back at him by pouring his wine over his head and tells Tyrion that he will now be the cupbearer for the day. He throws his wine cup on the floor and tells him to pour him more and Tyrion obliges while holding his tongue.

The awkwardness is palpable and newly appointed Queen Margaery tries to pull him away by announcing the service of the pie.

Ohhh PIE! Joffrey goes up to the gigantic pie, hits it with his new Valerian steel sword and releases the doves from inside. The scene is glorious and thrilling and for a moment we catch a glimpse of a dead dove inside. Margaery feeds her new husband a piece and as he is about to feed her, he turns his sight again to his uncle, when all of a sudden he starts choking.

Joffrey chokes and coughs and it feels as if no one is really helping. Out of nowhere Sansa is ushered away by Ser Dontos. Cersei grips her son in her arms, while his last action is to point at Tyrion as to blame him. She screams and yells, “He killed my son, take him.”

Oh my god, oh my god, that is all I kept thinking.

My husband read the book, so he knew this was going to happen, he sat there smiling smugly. Seriously, I get mad when he knows these things are coming, I couldn’t believe it. All I want to do right now is go home and replay that scene again and again. Hats off to the creators of this show, what a great episode, it was well played and it built up the tension perfectly.

RIP Joffrey Baratheon and Jack Gleeson, the actor who portrayed the character so well. Even though he was an asshole, I will miss his presence on the show. Look forward to seeing what will ensue from his death and the aftermath that is Tyrion’s life.