First of all movies about anything scientific are usually geared around incurable diseases or outbreaks of some rare disease, think Contagion and Andromeda Strain. This movie is lumped under science fiction, but it doesn’t have the usual components such as aliens like ET, bad guys with super human powers like The Matrix, robotic type weapons like District 9, nor does it have any odd monkeys like Planet of the Apes or Godzilla. Where does this movie fit in?

It stands alone, I believe it is a rare movie that not only breaches the subject of science, but also touches on the inherent capability of human beings to overcome adversity.

Being an astronaut is a profession the majority of us out there know nothing more than what we have seen in Apollo 13 and the closest we have come to being one is eating astronaut ice cream. Gravity brings us closer to the actual feeling more than any other film. 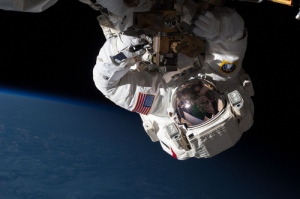 The movie is about a newbie astronaut, Dr. Ryan Stone (Sandra Bullock), a scientific engineer, who is going up to space for the first time to install a device onto the Hubble telescope. She is joined by Matt Kowalski (George Clooney) who is on his last mission into space and is helping her navigate the ins and outs of her new job.

What the film delivers is a simple story about a space mission gone wrong. We get first and third person point of views throughout the film and we get the nauseas sensation of what it must feel like to be floating around in space. Air is precious, every breath one takes has to be done with care, “not to fast” as Kowalski instructs Dr. Stone and we get the sensation and the clench in our chests each time she breathes.

The conversations that transpire between Kowalski and Stone are deep and give us a view into each one of their lives. He gives us the viewpoint of someone who despite being in a catastrophic mess, still takes time to enjoy the view, he’s experienced, he has been there and done that, but with Stone we see her naiveté in understanding space. Although she is extremely smart, space is like that cold lake one has only run their toes across, but never actually dove into.

Gravity took over 4 years for director Alfonso Cuaron to create, being that the technology to even make the movie was difficult. He utilized CGI, lightboxes (9x9x9 foot cube outfitted with 4,096 LED bulbs) which allowed for the shadowed images to come across Bullock’s face and puppeteers that literally suspended Bullock when she was going from room to room in the space station shuttle. I mention this solely because I am the type of person when I see a movie of this type I want to know how the hell did they do that?!

At some points, this movie resembled a documentary, similar to Planet Earth. Many scientists have come out to say that there were many inaccuracies in the movie, but I think that this movie was not aiming to be a full-fledged documentary. Instead despite those inaccuracies, as I guess, the majority of us out there wouldn’t even be able to spot, the film delivers the movie experience people paid money to see. I doubt anyone would pay money just to see images of space or Sandra Bullock wearing long johns and space diapers.

The movie is heartfelt and beautiful. At points, if you stopped your DVR, each still on the screen could be captured as a beautiful photo, like the shot of Stone in the fetal position, absolutely stunning.

The performances by both actors were great, Clooney’s is subtle yet sincere. Bullock’s ability to carry the entire film is recognition worthy. There are not many actresses out there who can pull that off and her ability to deliver such a profound role acted out against a green screen is phenomenal.

If you haven’t seen this already, I definitely recommend going out and renting this because it does not disappoint. It deserves all the accolades it has received thus far and this film really showcases the capabilities of Cuaron’s mind.