This past week was the last episode and finale of Season 1 of True Detective. The series was only 8 episodes with a definitive ending this year and next season will be a whole new story, similar to the format of American Horror Story. This reminds me of how the Twilight Zone used to do it back in the day. This format is gaining speed because it allows for creators and directors to draw in big names for just a few episodes, being that they don’t have to commit to a show forever. Television nowadays is just as good as movies and actors know if they want to be part of this TV revolution, they need to jump on it now because these shows garner so much attention. True Detective generated buzz like no other show in a long time, I haven’t seen such buzz since the beginnings of The Walking Dead and Game of Thrones.

Back to the recap at hand, I really took some time before writing because I kept thinking about it and replaying the show in my mind. On one hand I was a little let down, on another when I reasoned it, I chalk I up to the story was told and it ended. Nine times out ten people are disappointed with show’s finales (Lost and Dexter come to mind). It is very difficult for shows to live up to every expectation of every fan out there, but it is like reading a book, the story must come to an end, whether the audience likes it or not.

Given that fact, I believe that the finale was well crafted and brought the gist of the story to a full circle. I do believe that there were flaws to the story, but I am overlooking them, due to the fact that the show was exceptionally well and kept me wanting more every week.

The finale, “Form and Void,” brings us back to where we left off. Marty and Rust are back at it, as if no time has passed between them. It is obvious that together as detectives, they are fierce and smart.

Marty asks Rust why does the picture of the “spaghetti monster” have green ears, to which he tells him that it is due most likely to the fact that it was reminiscent of leaves. Marty sees something different though and he brings up an old picture of a house that been freshly painted green in the 90’s. Upon investigation, they find out from the woman that used to live there that the company that had painted her house was owned by the Childress family, aka the old sheriff who died and who was covering up the Marie Fontaneau case. What I didn’t like about this, was that if it was that easy, why didn’t they think of this before?

The lawnmower man with the etched face is Errol Childress, the Yellow King, the Spaghetti Monster, the man that is truly a scary freak and yet was right under not only the detectives noses, but ours, the viewers as well. To me, this means that evil lurks around every corner, to use that cliché, but it does, sometimes these types of people are who we least expect and there is no hiding from them, because they are in plain sight.

Marty tells one of the cops and tells him to trust him on this and that if he calls him to please answer because they may have the killer. To which he still believes it was Rust who did it and who is convincing Marty of something different.

We get a glimpse into the life of Errol and his sister. Together they live in the most disgusting, hoarder-rific house, next to a shed of where their father is kept, chained up, decaying and dead. Together the pair, touch each other and live like freaks in the woods. Ok now that was scary! 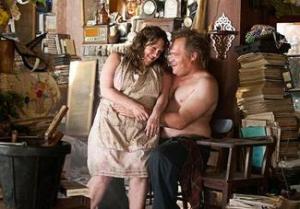 Upon arriving at the house, Rust and Marty, seem nervous and a sense of fearful anticipation is built up. Marty asks Rust, who is staring out into the wilderness, “you still seeing things.” Rust tells him this is it and he knows that this is the Carcosa. I love how this scene was put together, it truly feels like the actors sensed that this was the moment, what they had been chasing was here and they could feel it in their bones.

Marty goes up to the house and talks to the sister asking to use her phone. She refuses to let him in and Rust goes out looking for Errol. From Marty’s perspective, he gets into the house and we see in his eyes the disgust and horror at seeing this house of filth. He points a gun at the sister’s head to which she says, “it’s all around us, before you were born, after you die.” This seems like a metaphor for evil, for the entire show itself, even if they catch this killer, as the show has mentioned before, there will be others and this will never end. What has happened before, will happen again, watch the news and it is obvious that this is true.

From Rust’s perspective, we see him going around and deeper into the caverns of Errol’s world, filled with stick men, artifacts of people who have died, and a series of ins and outs that seem like a haunting maze, ending in a room that has a hole through the roof. Rust finally is seeing what he has been studying for decades, he is now face to face with the killer’s world and now the killer too. Errol comes up from behind and stabs Rust, pulling him upwards into the sky, as if serving him up as a sacrificial object, to which Rust head butts him to the point of making him dizzy. 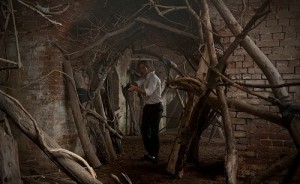 Marty comes from behind, Errol puts an ax through his chest and Rust manages to shoot him dead. This was a really interesting scnee, they both lay bleeding and Marty holds Rust. The culmination of their hard work is at hand and they were willing to almost die for it.

The last act of the show is them at the hospital, they both live, but Rust says that he shouldn’t have made it. He tells Marty, that he felt his daughter and his father, as he was sinking into death, he had accepted it and let go, yet he didn’t die. Now he believes in God, in an afterlife, someone who for so long seemed to believe in nothing. In the darkness he felt comforted and love.

He sits there in his wheelchair, pontificating that he saw Errol before, and he missed it. That’s Rust and he is never going to change.

That is the gist of this show, there will always be a constant dichotomy between love and evil. The eternal fight that has been going on since the dawn of time and it will continue to go on, until the end of time.

The show left us with unanswered questions and a lot of questions as to why some issues were even brought up in the show. Yet it doesn’t matter, the show took us through twists and turns and ultimately led us to the killer being killed. The show took us along through the cat and mouse chase and we liked it, we can’t diss on the creators for doing that to us. Killers get executed in prison everyday, yet crime still exists. Errol paid for his crimes, he died and Marty and Rust will remain heroes, yet crime will continue to pervade society and I am sure that is where we will end up next season. It will be a new city, a new killer and heroes who will stand the test of time. The story like the underlining meaning of the show, will be told over and over again. 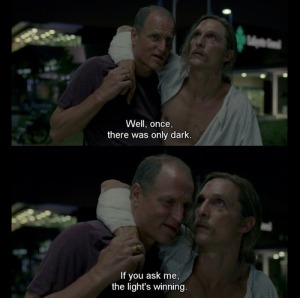