The Walking Dead Recap: Season 4, Episode 13: One is the Loneliest Number

Last night’s episode, “Alone,” focused this time around on Maggie’s camp and Daryl and Beth. I am finding that these episodes are really building us up to understand the characters much more deeply than before. Last week we learned a lot about Daryl and Beth and this week we delved deeper into understanding even more about the other characters.

This week’s episode started with seeing Bob before he met the group, in a brief flashback we see him laying low, swigging Nyquil (how in the world did he fight zombies on that stuff by the way) and wandering alone. It also brings us back to the time when he first met Daryl and Glenn, he tells them he doesn’t care who they are, but that he would go with them either way. It is obvious us that he knows what it feels like to be alone and how awful that feeling is in this apocalypse. 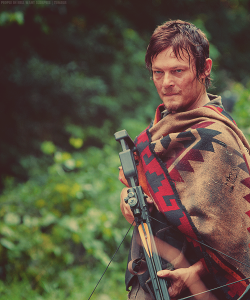 (Back when Daryl was rocking ponchos)

Maggie, Bob and Sasha are in a cloud of fog and start getting attacked by walkers. As JB Smoove said in last week’s Talking Dead episode, is Snoop Dogg on this show now? Is he making a cameo? If so, they must be thinking, puff, puff, give! LOL. But no really it’s a giant group of walkers that are getting harder to fend off, Maggie was this close to getting bit, but Sasha shot him in the head and now they only have 6 bullets left.

They finally see a sign for Terminus and Maggie is determined to go there. She knows in her heart that if Glenn saw that sign, he would assume she is there. Sasha is afraid to go there, perhaps she believes that if she goes Tyreese will not be there and she may have to face the fact that he is not alive.

Maggie sets off on her and leaves the group a note in the sand, that she has gone to Terminus and she essentially doesn’t want to drag them down there with her.

On her way, she kills walkers and uses their blood to write signs for Glenn, to let him know she is headed to Terminus.

Bob, we are seeing has a kind heart, he is not just the drunk pseudo-alcoholic that we got to know a few months ago, there is more depth to him. He knows what it feels like to be alone, that despair and fear and he wants to catch up to her. Despite his argument for returning with Maggie, Sasha is refusing to go and Bob gives her a kiss and tells her she is not alone and to stay with him. Sasha being the stubborn, strong woman she is veers off and goes into a nearby town.

The town seems pretty quiet and she goes up to the top floor of an old building, which was her original plan, to find a building and get to higher ground. When she looks out the window, she sees Maggie laying on the floor in between dead walkers and as she pushes on the window it falls out, hits the ground and wakes the dead! Sasha runs down and the two defeat a small army of zombie bitches.

They have a heart to heart talk and Maggie realized that she didn’t want to be alone and that she did need Sasha and Bob’s help to find Glenn. Eventually they catch up to Bob and the gang is back together. Sing it with me, “Reunited and it feels so good.”

On the other side of the town, our favorite little pair, Daryl is teaching Beth how to follow tracks and use his crossbow. In an attempt to catch a walker, she gets stuck in a trap and hurts her leg. Girl down, girl down! Daryl being the gentlemen he is offers to carry her on his back. I think I just heard all the DD fans out there swooning, I am predicting it, Bethyl is going to happen!

Off they go and they find an old Mortuary house, where there are some walkers who looked like they have been restored and put into caskets. It is a creepy scene, reminiscent of Six Feet Under, for a moment I thought David Fisher was going to pop out and start embalming some walkers. 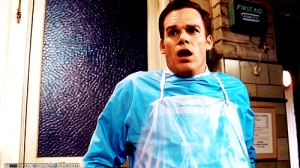 (Where is David/Dexter when we need him?)

They raid the cabinets and find that the house appears to be very clean and kept up. Where are these OCD people and can I hire them to come clean my house? The food in the pantry is nice and clean and dusted off. Daryl and Beth had been having conversations that she believes there are still good people left out there, Daryl’s usual response is a grunt, but when he sees that the pantry is clean he decides they should leave some food behind in case it does belong to someone. Beth says, “So you do believe there are still good people left.”

Daryl scoops up jelly in his mouth with his finger and calls dibs on the pigs feet in the cabinet, alluding the question, but it is obvious that there is an emotional shift occurring inside of him. Beth is helping him to realize that there are good people out there and not everyone is a horrible person out to cause harm.

After setting up their alarm system outside of the house with cans, they hear rustling outside, at first it’s just a dog, then they look again and oh no, it is a herd of zombies.

He tells Beth to grab her stuff and meet him up with the road. He kills off many of the walkers and runs outside only to find Beth’s backpack on the floor and a red car speeding away. Someone has kidnapped Beth? WTF!

Daryl tries to run after her as much as possible, then he reaches a point where he feels defeated. We see him sitting in the middle of the road with his head down, we have rarely ever seen Daryl look so defeated and hopeless. By our standards thus far, he has been a fighter, not a quitter. 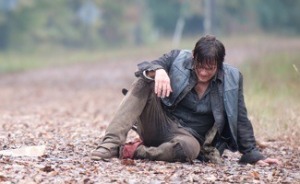 All of a sudden, Daryl is faced with a group of marauders. They encircle him and one says, he calls dibs on his cool motorcycle jacket. Daryl puts his crossbow up and the leader of the gang, says he respects him for his choice of weapons. People who hold rifles now, used to be teachers, bankers, etc, but a guy holding a crossbow, well he has always been a crossbow guy. In this apocalyptic life and in the past when life was normal. This tells him that basically, Daryl was a badass and he could actually use him on his team. The guys holding him up, yup, they were the guys that were in the house with Rick.

What I liked about the episode was that like the title it highlighted the fact that many people in this apocalypse have ended up alone, at some point or another and being alone can bring about the lowest of times. In this world, I am sure many people were left alone and that is a deep seated fear that ruins through the entire show and what keeps this group so strong and solidified season after season. The fear of being and feeling alone is a desperate one, but when they stick together the group is fierce.

All I want to know is when are Beth and Daryl going to hook up? We need to see that happen please please!

(Daryl realizing he just fell in love with Beth)