Wow, what a great TV show this is turning out to be, I have to say it is the best, thus far of 2014. It has all the perfect elements of a great show; good actors, a great storyline that keeps the viewer guessing, twists and turns at every corner and never is there a predictable moment. At this point, we only have 2 episodes left and things are really heating up for Rust and Martin and details of their story are finally being uncovered. Martin and his wife Maggie’s relationship has been on the rocks since she caught him cheating with the busty and crazy Lisa. Flashback to 2002 and once again, Martin is wooed in by a young lady, she was one of the ex-prostitutes he had questioned earlier in the season, now she is doing better and working at their local electronics store. They hook-up and of course the craziness ensues and she starts to get attached to him. 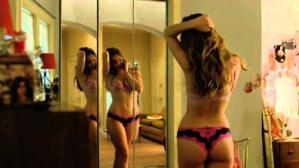 Remember this was the formative of years of sexting, finally flip phones gave people the ability to take and receive tiny naked images. Maggie sees his phone and opens it and yup she is raging mad. All the while Martin is sitting there smug, enjoying his pasta. Fed up and pissed off, she takes off to see Rust. I really liked this scene because it showed that energy brewing between the two.

Earlier that day Rust was put on leave for interviewing people from the LeDeux case. Although it had been closed, Rust has a hunch that something else is going on and that someone else is out there killing people. The police are blind to this situation and him rustling up old cases doesn’t sit well.

At home, his house is set up as an investigation room, almost like Carrie in Homeland, but he’s not that crazy. Knock on the door and oh lord it is Maggie, sobbing, distraught and she takes a whole of Rust, who is also in a drunken stupor and forces herself on him. What ensues is about 2 minutes of drunken and sloshy sex. Yeah, I just made that word up, but that’s what it seemed to be, it’s sort of like when you drink too much and the liquid is swishing around in  your stomach and you may just hurl. 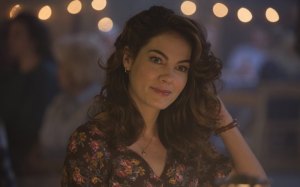 Rust realizes that this was all a ploy the minute it was over. She goes home and tells Martin, who she knew would not stand for it, especially since it happened with his partner. Now we know why the two in the present time are no longer on speaking terms. Whatever happened after that to Rust, we still need to find out.

The last scene shows both of them leaving police headquarters in present time and they meet on a highway, where Rust pulls Martin over. He tells him they should talk, Martin grips his gun for a second. Perhaps he believes a bit that what the cops said is true. Earlier they said that they believe is Rust is behind the killings. Is Rust really the killer?

So far this show is so good and I can’t wait to see what happens next. Who else out there is a fan?

This time around Hannah has to interview Patti Lupone for an advertising editorial at her new GQ job. Her bf, Adam lands a role on Broadway, to which Patti tells her everythign is going to change with him. This makes Hannah feel insecure about her realtionship, thinking that he will leave her or cheat on her when he becomes wildly famous on Broadway. She tells her Adam is weird, who would want him, to which Patti says, “Even the elephant man got laid on Broadway.”Ok, that would make any girl nervous.

Ray tells Marnie, he no longer wants to see her as a fck buddy, he wants a real relationship.

Hannah gets a room at a fancy hotel where Shoshanna says they have “Mario Badesco in the bathroom, I am totally stealing it,”and Adam brings his new acting friend Desi along for the ride.

Marnie instantly clicks with his friend and they start singing together,  like a modern day Johnny and June Carter Cash. Seriously, his friend is super hot and I am sure she will end up hooking up with them and it will probably end disasterously as most things do for her.

I really like how self centered Hannah is shown to be, I feel like that is so true of how people act in their 20’s. Also did anyone check out Adam’s toe sucking scene?

The story is moving along and I really hope it picks up and something more exciting happens!