I heard a lot of rumblings about this movie since it was James Gandolfini’s last movie, with that said watching this movie was bittersweet.
This film is a simple story about Eva (Julia Louis-Dreyfus), a massage therapist, who is divorced with a daughter who is about to go to college. She is kind, funny, goofy and a bit quirky; she has flaws, but who doesn’t. 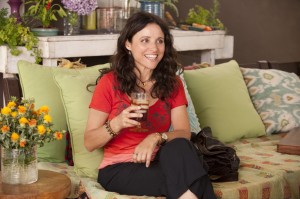 She goes to a party one night with her married friends, Sarah (Toni Collette) and Will (Ben Falcone) and meets Albert (James Gandolfini). He is very similar to her, he is divorced and also has a daughter who is about the same age, both are beginning to fear the empty nest syndrome that is about to occur in their lives. On that night, she also meets Marianne (Catherine Keener), a poet, yup a real life poet, who is beautiful, friendly and really needs a massage.

This storyline in this film reminds of the movies of the 40’s and 50’s, boy meets girl, they fall in love and a comical issue keeps them apart or mad at one another. That is exactly what I enjoyed about this film. Movies do not have to be complicated, have guns, shoot-outs, gratuitous sex scenes and the like to be fun to watch.

What transpires is that Eva becomes friends with Marianne, not knowing in the beginning that she is Albert’s ex-wife. Just like most people, Albert and Marianne talk about their exes, usually in not the most flattering light. Now what happens when a person is hearing both sides? Eva sits happily in the middle, she should walk away from one or the other or just confess, but she doesn’t.

In a way, this fiasco adds a little spice to her mundane, pretty normal life.

The dialogue in the film is funny; the things that happen to the character are very realistic of moments in many people’s lives. One of the scenes I really liked is when Eva is at dinner with her ex-husband and his new wife, at this point she is kind of like the Marianne and she talks about she hated when he would buy cookies because she would eat them all and basically he contributed to her weight gain. (I seriously have this issue with my husband). These are the quirks of marriage that are real and couples either learn to live with it or they give them the boot because all the little miniscule annoying quirks add up one day into a terrible mess.

The issue here is can Eva accept Albert? After all the negative things she hears from Marianne, can she put those things aside? A lot of the things she belittles her ex about are the things Eva likes about him. He’s overweight and she doesn’t mind, he eats his guacamole with no onions, and it really doesn’t matter to her.

I thought this was a sweet and funny movie. It’s not corny, sugar coated or too sweet to taste, but just right. It’s like that perfect cookie with just the right amount of cream and crunch.

Julia Louis-Dreyfus is so great in this movie; she delivers a subtle performance that leaves an imprint on your mind. James Gandolfini only serves to remind us, that he will no longer be able to give us these types of movies any longer. He was more than Tony Soprano and it is evident in this film. His character is nuanced and gracefully funny. 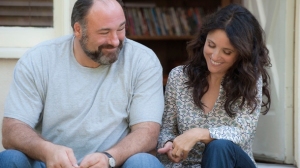 I highly recommend this movie, it’s a great date night, stay in, order pizza, and have some wine kind of flick.

Hulu’s Only Murders in the Building is about a rag tag group of sleuths who get together to try to solve a murder that occurred in their luxe NYC high-rise. All while making a podcast in the process to document their findings. Steve Martin, Martin Short, and Selena Gomez, make an unlikely detective trio, but the three of them play off one another in a witty and funny way. The dialogue is hilarious and is so very Steve and Martin; two actors whose humor I have always loved. What I like about this show is that it reminds me of a throwback to old Hollywood mystery movies, the ones that have humor and suspense mixed into it. Each scene is precise and there are no fillers, therefore no time is wasted. I enjoyed the fact that every time you think you know how something will end with the story, the show quickly spins you around and throws you for a loop. If you are looking for a show that has humor and mystery and you love true crime podcasts, then this one is for you. Who else loved the Arconia gang?
In this YouTube day and age, there isn’t a day that goes by where we are not lured by clickbait. We see an attention seeking headline and we click and just like that we have succumbed to the lure. Netflix’s new show Clickbait does just that; grabs our attention and leaves us hooked. Nick Brewer is a normal guy with a beautiful family and then suddenly one day he is kidnapped, and his face plastered all over the internet. The kidnappers threaten to kill him when the video reaches 5 Million views.
Native Americans are rarely represented in the media, other than the typical storylines of destitute and sadness. In Taiki Waititi and Sterling Harjo’s new series, Reservation Dogs, we get a look at reservation life in Oklahoma. It’s real, raw, and completely hilarious in that dry sense of humor type of way. The show is about a group of teenagers and the mischief they get into, and with each episode they mix in their Gen-Z world with stories that involve the elders of their community. The stories that play out are warm and endearing, for example Elora Danah wants to leave and go to California to explore life, and her father tells her that she will come back because she will miss exactly what she’s trying to escape. It’s a concept that no teenager will understand until they get older.
Hulu’s Nine Perfect Strangers is a mix of Big Little Lies and White Lotus, sprinkled with a bit of Clue. The whodunnit vibes and tension can be felt throughout the show, but it is not specifically a murder mystery. Nicole Kidman stars as Masha, the owner of Tranquillim, an expensive and elite retreat for those who want to unwind and come to terms with their issues. Many think they are there just to chill out and relax, but what they don’t know is that Masha has hand selected them and is looking to heal them with her own new age methods.
If you missed Season 1 of Ted Lasso, well then now is the time to start Season 2. Lasso is wholesome to an extent and a fun and easy show to watch. Which is kind of a nice break from all the crime and horror filled shows that pervade our television screens. Jason Sudeikis stars as Lasso, the American coach who is sent to England to help guide a failing soccer team, he is hilarious and filled with a plethora of dad jokes. He has so many good jokes and he slips them in ever so slightly, so it helps to pay attention when he speaks. This is a great one for any sports lover as well, as they show the camaraderie and sportsmanship that it takes to be a professional athlete. The show itself has taken off with professional coaches and athletes because it encapsulates what it means to be in the thick of it and playing on the field. Lasso is charismatic and sweet and will win the heart of any viewer. I love all the characters and find myself laughing from beginning to end. Check this out on AppleTV+. Who else is a Lasso fan?
an Murphy just turned the American Horror Story franchise on its head by making a collection of short stories to bide our time before the new season. One of my issues with AHS has always been that the storylines falter mid-way through or they try to do too much and the story always pays the price. But with this new season, we get one story per episode (except for the murder house, which had had three) and that’s it. This allows them to give us a quick and creepy story and add in lots of different actors throughout the season. I think people are either going to love or hate this. I enjoyed it because it was a quick and easy way to get my AHS fix without having to commit and get involved in a lengthy story. I didn’t think every episode was perfect, there were some cheesy B-movie type ones, but for pure entertainemnt, I recommend it! Who else watched this and did you love or hate it?