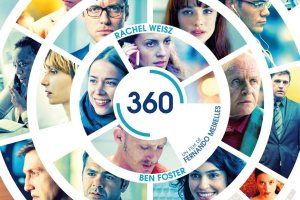 My husband randomly bought this movie because it was on sale for 5 dollars, so we wondered why it was in the sale bin, but we are always open to trying out and seeing different movies. This was a pretty good movie and the day after all I could do was think about the movie and replay it in my mind.

Whenever I keep thinking about a movie the next day, I know it had to have some element of it that made it interesting and thought worthy.

360 stars an ensemble cast including Sir Anthony Hopkins, Rachel Weisz, Jude Law, Ben Foster and other new faces that brought an eclectic element to the film. The movie takes place literally all over the world, when in the beginning one decision made by Michael Daly (Jude Law) sets a domino effect of changes around the world and alters the destiny of all.

He is faced with the decision of whether or not he should cheat on his wife with a prostitute. Does he or doesn’t he? He knows he shouldn’t, but she is there beautiful and sexy, and to her this is just her job, and he just another client.

Every single story or vignette introduces different characters and places, slowly, but surely they all become intrinsically linked to one another.

One of the most touching scenes centers around John (Anthony Hopkins) and Laura (Maria Flor), two strangers who meet on a plane. Laura distraught and having just broken up with her boyfriend downs wine by the gulp full to ease her broken heart and the man sitting next to her John lends a caring ear and also tells her about his daughter who is missing. He has been searching for her and keeps getting led to various morgues to identify her body. 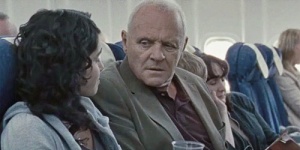 Both are on a journey that is heart breaking and painful, but they have a vibrant spirit and willingness to remain happy. Laura offers to him a smile and tells him that in life you “only get one chance.” This sticks to him and makes him realize all the sorrows he has placed on himself by not giving up and accepting that his daughter is probably dead and gone forever.

At one point in the airport they are delayed and Laura meets Tyler (Ben Foster). He is an ex con, serial child rapist, and is trying to get out and stay clean.

Foster plays that character perfectly as he does so well in a neurotic, chilling way. Laura doesn’t see the bad in him and just wants to befriend him, but he is beyond fixing as he is a little loony. The scene between the two is suspenseful and it makes you feel for both characters. 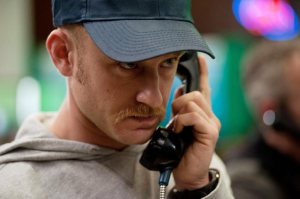 Overall the movie was a good watch, I think the tying of all the stories made sense and had a definite conclusion. I liked that they did not leave it open with loose ends and I felt that the story was ultimately fulfilled.

What the movie lacks is more depth. I feel like the story was told, but it needed more substance. A lot of the vignettes were there to tie some of the stories together, but they did not delve deeper than a mere surface incident. I would have liked to have seen what came of some of these people.

I wanted a deeper purpose to everything that occurred and to feel that what I watched had a a more significant rationale. On another hand, maybe it was made that way to show us that this is life. Things happen beyond our control and sometimes a larger explanation or reasoning cannot be given, they just happen for the sake of keeping the wheels of life in motion.

Similar to the title of the movie, 360, is circular in its action and there is a perpetual movement of the things that occur in life, even the bad parts of it. Prostitution has been around for ages, it’s a bad part of society, but it keeps revolving, when one girl leaves, a new one can easily take her place. This notion hangs over the movie like a dark, ominous cloud.

Overall, I would say definitely check it out on one of those nights where you have nothing to watch and want to do a little soul searching of your own. As I mentioned in the beginning, it does make you think and it is interesting.

Is it the best movie out there? Not really, but it is worth a DVD night in and one you could watch with a date. You could totally impress her and make her look like you are one of those deep, intellectual types.